THE HENLEY FLIGHTS OF FANCY

This is my latest acquisition and I was very interested to read the information on the sheet enclosed. Thanks to Deryck Henley, it puts a little light on the history of the knitting Nancy. He does say that not a lot has been recorded regarding the art of french knitting, but what he has said here brings us another step closer. It would be great to visit the Ruddington Framework Knitters' Museum in Nottinghamshire which is mentioned on the information sheet.
They have a website you can visit here. 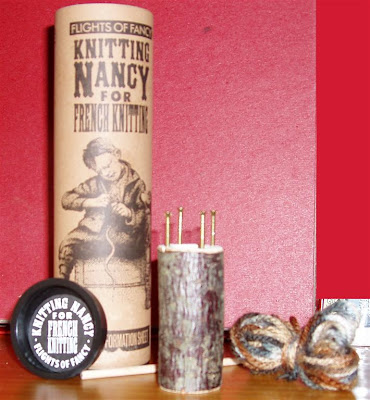 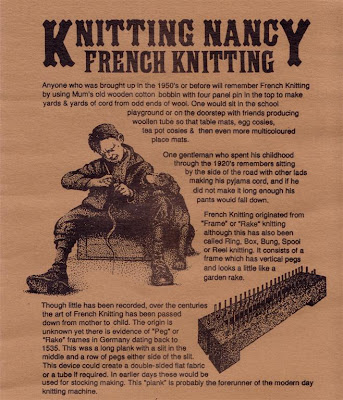 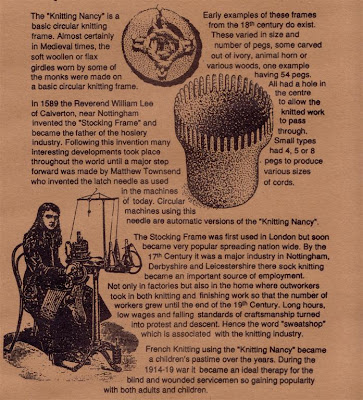 Please click on picture for larger image.
Posted by crazyhaberdasher at 2:48 PM 7 comments:

Dont Keep Them in the Dark!

Who would think that there could be so many varieties?

Don't overlook the humble mushroom-shaped spool knitter, a simple collection of these would be interesting, too! 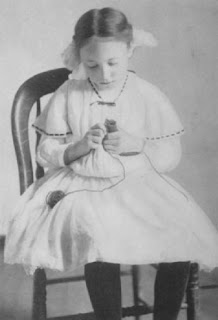 Here is a book called Spool Knitting by Mary McCormack published in 1909. It has a lot of simple patterns using the spool knitter and you can copy it yourself - here is the link.

In the previous post I spoke about spool knitting being regarded as a children's craft activity and that I would show some of the boxes that I have with delightful graphics of children and knitting spools. I have limited this post to box tops and I will show boxes with their contents in another post. 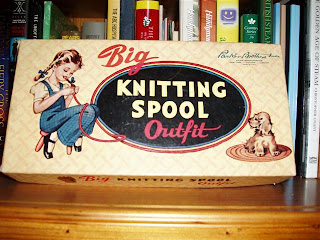 Big Knitting Spool Outfit from Parker Brothers Inc. made in the USA, no date. 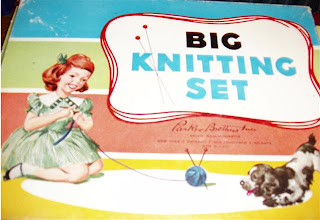 Big Knitting Set by Parker Brothers Inc., made in USA and dated 1956. 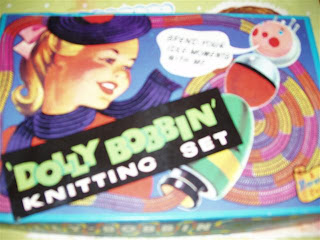 'Dolly Bobbin' Knitting Set - A Berwick Toy, made in England, no date. 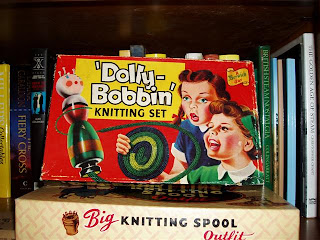 Another 'Dolly-Bobbin' Knitting Set - a Berwick Toy, made in England, no date. 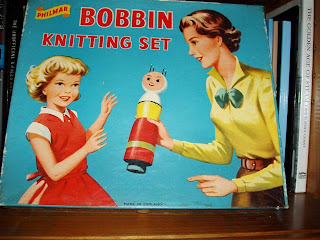 Bobbin Knitting Set by Philmar, Made in England, no date. 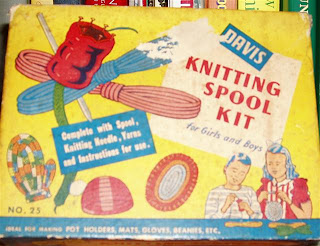 Knitting Spool Kit by Davis, made in USA, no date. 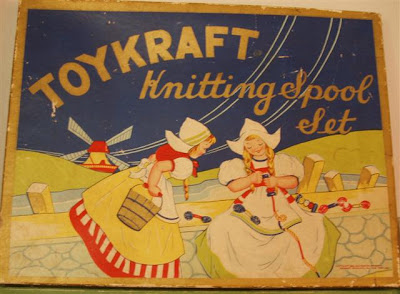 This is my favourite.
Knitting Spool Set by Toykraft, made in USA, dated 1936. 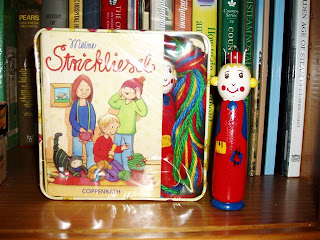 This is a very new spool knitter from Germany, Miene Strickliesel by Coppenrath and dated 2006. This delightful and colourful spool knitter comes in a tin. I have shown another spool knitter standing beside the tin. 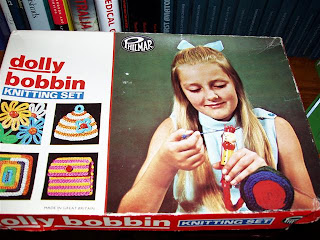 Dolly Bobbin Knitting Set from Philmar and made in Great Britain, no date. This time we have an actual photo of a young girl working on her spool knitter. 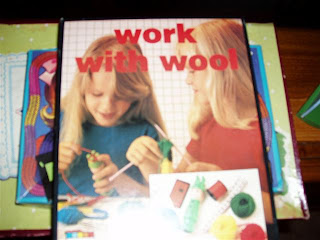 I apologize for the poor camera work here. Another box with actual photo, "Work with Wool" from Dekkertoys London but made in Hong Kong, no date.

If anyone viewing this has any of these sets and can give me an approximate date/year, (perhaps when you received one as a child), please let me know, thankyou!

A LITTLE ABOUT SPOOL KNITTERS

Knitting nancy, knitting bobbin, dolly bobbin, spool bobbin, knitting dolly, french knitter, tricotin, strickliesel, strick susel, strick hanni, punniken....... (to see the full list of names for these spool knitters, see my first post) ..... these are some of the names that have been given to these small wooden items with a hollowed out centre and nails on top.
It is very hard to find information on the spool knitter.......according to some, it is thought to have evolved from the lucet ((a tool for making cord, drawstrings, braids, etc. and lucets found date back to the Viking era. It was a common tool in Europe around the 16th century onwards and made from materials such as wood, bone, horn, ivory, tortoise-shell and mother-of-pearl) ...for further information refer to Lucet Braiding by Elaine Fuller (available through Lacis)).
Spool knitting is regarded as a child's activity, with the many boxed sets that are attractively packaged showing children illustrated on their box lids happily crafting with the spools. (I will be showing some of these boxed sets in a later post). The spools themselves are painted, colourful characters that appeal to children. In later years we find plastic spool knitters, too. 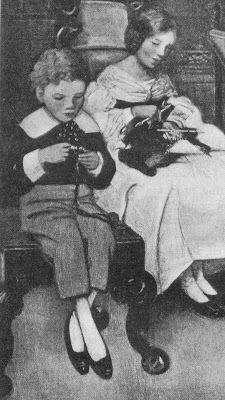 The above picture is part of a painting found in the book Old-Time Tools & Toys of Needlework by Gertrude Whiting first published in 1928. Ms Whiting states that the artist and date are unknown, and you can see that the boy is spool knitting. 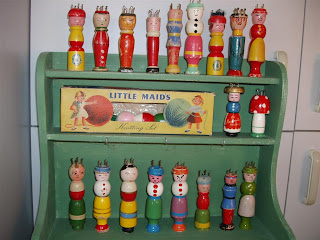 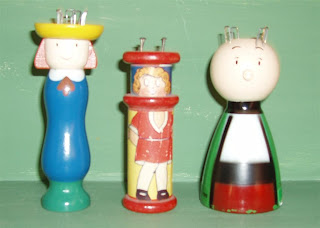 Three characters that can be found are - Madeline, Little Orphan Annie, and Becassine. 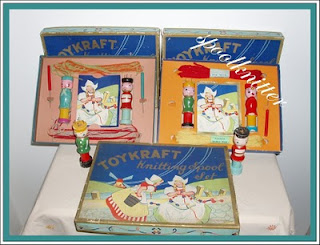 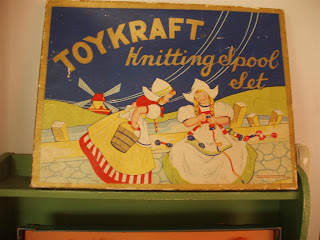 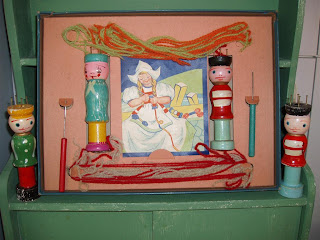 Updated March 2010 - Photo showing three sets. On the lid is - Toykraft Knitting Spool Set. The date is 1936 and made in the USA. I would guess that these sets were meant to be shared with a friend. 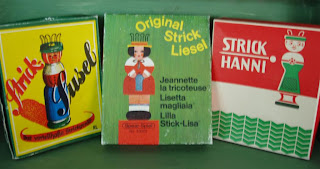 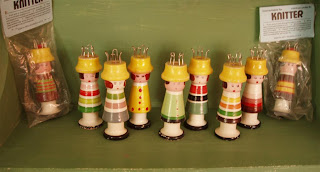 French Knitters - Some of my collection of *french knitters* so far. I have seen these in a Golden Hands publication from the 80's. As you can see there are many colour variations.
Posted by crazyhaberdasher at 12:48 PM 3 comments:

This is the tallest spool knitter of my collection so far.

This spool knitter is from France (tricotin is the french name for spool knitters). It is 17cms tall (6.5 ins). I am not sure if she is supposed to represent Becassine (a popular fictional children's book character in France). Maybe someone reading this could help me there. 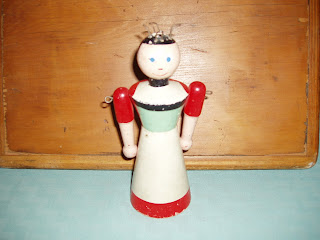 Here is the smallest spool knitter that I have complete with its own box. This one measures just 2cms and is a working model as you can see by the length of "cord", called a *strickliesel* which is the german name for these spool knitters. 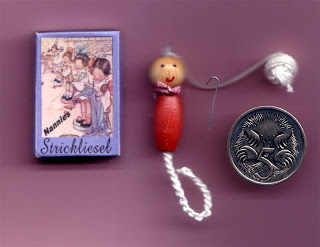 Posted by crazyhaberdasher at 2:56 PM No comments:

Aside from my other two blogs, I have chosen to start another blog about spool knitters and anything to do with these. I had posted about spool knitters previously but I thought that they needed their own space.
There is not a lot known about these wooden knitting spools and I hope to be able to uncover information about them whenever I can. 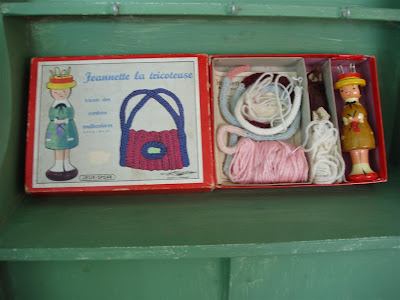 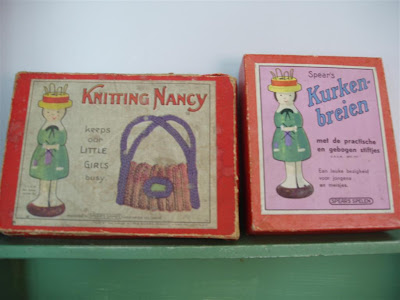 I have made a list of all the names that I have found for these knitters.

Added November 8, '07 - the list of names has been placed in the side bar -
they will be added to as more names are found.
Posted by crazyhaberdasher at 9:39 PM 2 comments: