This is to let you know that I have placed a link to "Noreen's Tutorials" in the side-column.
The tutorials are for - "how to spool knit".
This is Noreen of "Hankeringforyarn" and "Crone-Findlay".
The tutorials are very well-done and really worth a look. 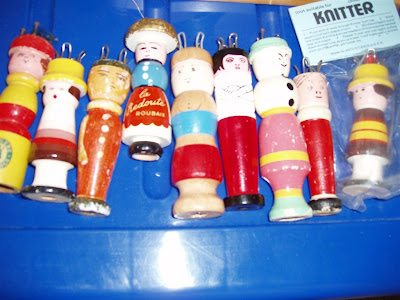 Posted by crazyhaberdasher at 10:40 PM No comments:

It is amazing what can be found as spool knitters.
I thought that you might like to see my Topsy spool knitters. They were both found in Australia and I would assume from this that they were made here, but I could be wrong.
A lot of this is guesswork and I am always open to other opinions and comments. Any little bit of information on spool knitters is what I am trying to achieve with this blog. 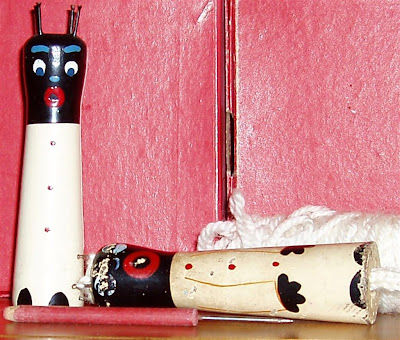 These Topsy spool knitters have a very simple shape but even though they are obviously the same, there is still a difference between them. Can you see difference?

This one doesn't have arms.
Below is the instruction sheet that was received with one of the spool knitters, but there wasn't a box for either of them. 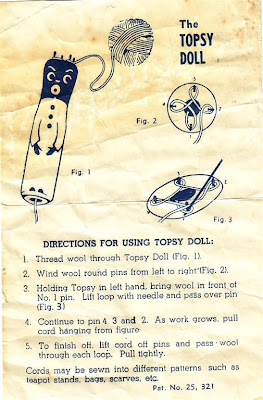 Posted by crazyhaberdasher at 10:45 PM No comments:

CAN SOMEONE HELP ME?
I have two spool knitters here that I would love more information on. For some time I had the "Little Orphan Annie" spool knitter, and then I found the second one - for want of a better name "Little Bo Peep".

There must have been a set of these characters made. I am asking for help from my readers and fellow collectors. Does anyone have one or more of these?
Can anyone give me the names of other characters that are available?
Does anyone have the original box (if they came in a box)?
Can anyone give the name of the maker, date of manufacture, country of origin?
(I am guessing that perhaps they come from the US.)

"Little Bo Peep" back
Posted by crazyhaberdasher at 9:21 PM No comments:

The Knitting Nancy by Spears Games is the most commonly found spool knitter in Australia.
The Spears company was first registered in 1879 and operated up till it was by purchased by Mattel in 1994.
For information on Spears Games History click HERE.
There are a number of books with patterns for spool knitting. If you enjoy second-hand book shops, look in the children's craft section, there may be some books there that contain patterns for spool knitting. (Remember that what one calls spool knitting, someone else might call french knitting, or whatever, so be aware that it comes under different titles.) Also check op shops/thrift shops, and flea markets. For new books - look up eBay or Amazon. I have some French and German books. Look for -
Das Strickliesel Buch (German)
Tricotin Malin (French)
le Tricotin (French)
These are obviously written in French and German but it is very easy to follow the diagrams.
And also don't forget to check out the Crone-Findlay website!

Spool Knitting Instructions
These are from a Spears Handicraft Outfit booklet.
Hint - if you put a mark at the first spoke/staple/nail where you commence work, you will be able to keep track of each round and the number of rows.
(remember to click for larger image) 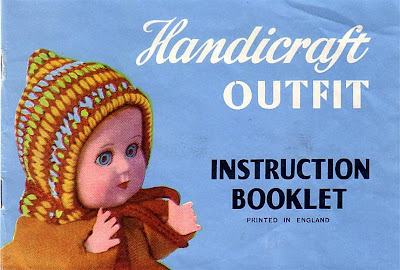 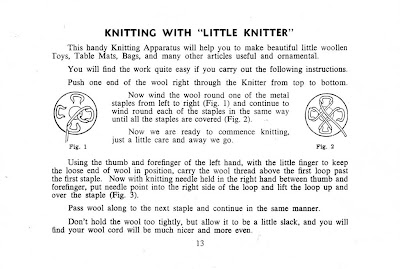 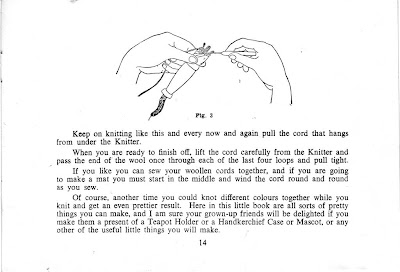 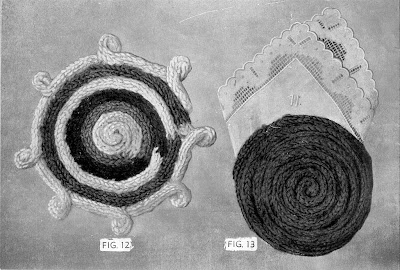 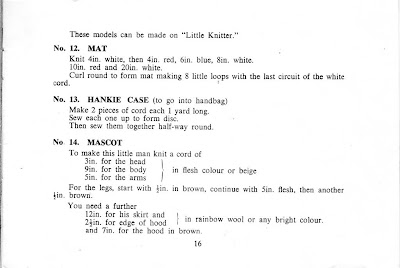 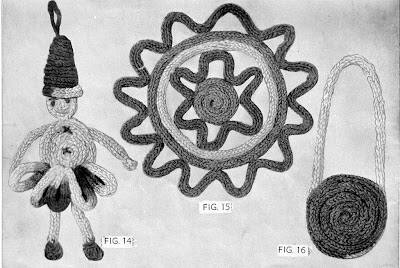 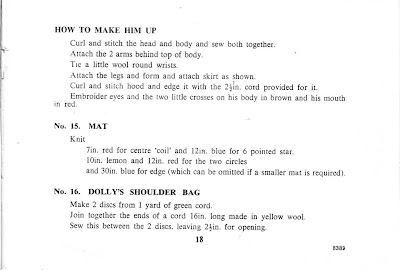 Posted by crazyhaberdasher at 11:48 AM 4 comments:

If you are looking for unique spool knitters to add to your collection, then you should check out Crone-Findlay. Here you will find spoolies of all shapes and sizes to tempt you - look at me, I couldn't stop at just one! (...and I know there will be more to come.)
And to top it off, fabulously talented Noreen of Crone-Findlay will make them by request.
Below is a magnificent "Mighty Mama" spoolie that she made especially for me, aren't I lucky?
It also has my name on it on a big banner on the back. It is very special. 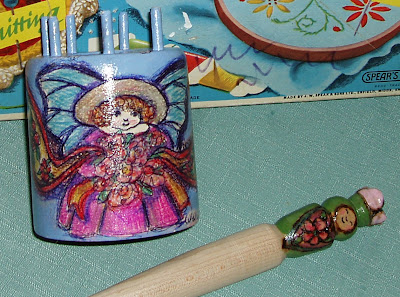 Apart from that, Noreen makes other lovely treats such as handmade crochet hooks. There is one in the above picture also. 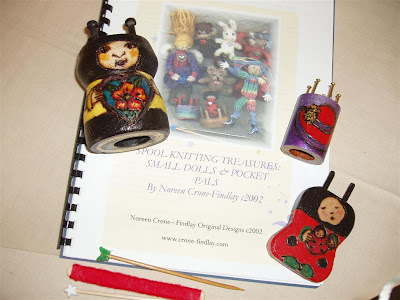 Above - here are bumble bee spoolie, red hat spoolie,
and ladybug w/babe spoolie, all made by Noreen. You will also see
in this picture, a book written by Noreen, one of many
different books that she has published.
Can't you tell that she has a fan here?!!

Posted by crazyhaberdasher at 4:00 PM No comments:

SPOOLIE ZOO!
Pictured above are some of the animals and critters that have been made recently. They came from England packaged in plastic packets.
There are from left - two monkeys, teddy bear, leopard, bee, giraffe, cow, two frogs, cat (yes, a spotted red cat!) and a penguin.
Click on picture for larger image.

These spool knitters are made by Spears. I have placed them in order of their manufacture which has become quite an interesting line-up!

The evolution of a spool knitter!

Below are "Knitting Nancies" and their boxes. Funny how the "Nancies" have become more like "Nevilles". The contents are just as I have received them. 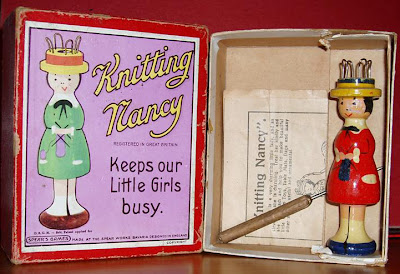 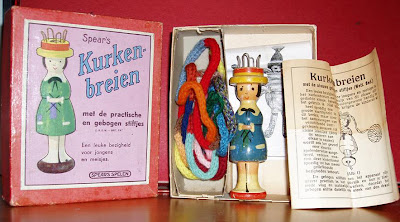 Kurken-breien is from The Netherlands.

Has Nancy had an "operation"? Another thing about these is that the spoolie on the cover doesn't always match the one inside! 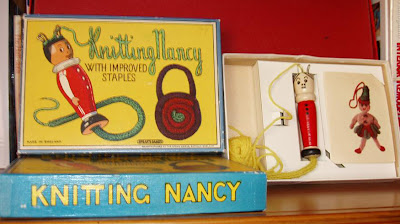 The 'Neville' above with his arms crossed and looking somewhat grumpy, I think is displeased at being referred to as a Knitting Nancy! We find later knitters with a more agreeable expression.
The 'Nevilles' are to be found in abundance, together with the most up-to-date of the "Nancies/Nevilles" below. It is great to find more than one in a box!

Added 2012 ...... When going back through my posts there are some things since
discovered and things that really need to be put right. I now know that the
male form knitter by J W Spear - Jacob Wolf Spear -
was referred to as Strick Peter in Germany
in the early years before the war. In England, they just stuck with
Knitting Nancy whether it was the male or female figure.

Posted by crazyhaberdasher at 9:00 PM 3 comments:

This picture is from the vintage knitting book - Lux - dated 1938.
I believe the spool knitter she is holding is the same as the one from the Toykraft Knitting Spool set. 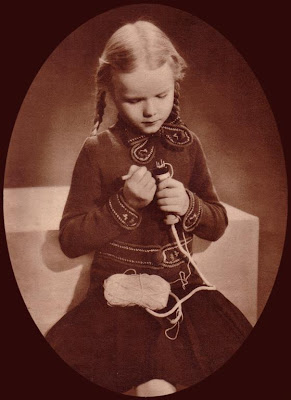 Shown here is a closeup of the knitter. 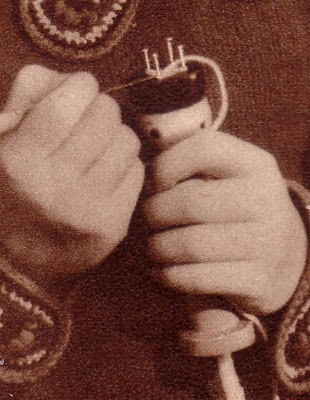 ...and here is one of the spool knitters that I have from these sets. Do you agree it is the same?

August 4 - This photo has been added later to compare the two "soldiers" that I have. They are basically the same, only slight differences being the length of the bases, pants, bodies, heads, and hats, and the one on the right is a little chubbier!. 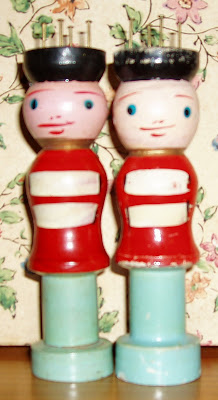 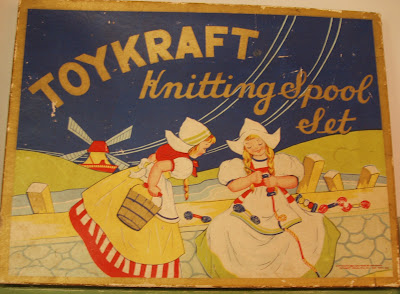 Posted by crazyhaberdasher at 8:02 PM 4 comments: