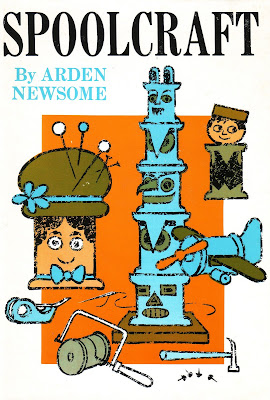 I recently found this fabulous children's book called Spoolcraft
by Arden Newsome.
Published in 1974, a hard cover book with 156 pages,
it is full of very interesting projects.

Among these headings are of course - how to spool
knit, a spool knitter to make in the
simple form of a "giraffe", and a spool knitted Santa project.
As well as a rocking horse, spool handle jump rope,
clown puppet, bowling set, totem pole, jingle bell pin,
pincushion lady, Nativity, and many, many more projects.

In seeking out books with spool knitting, it is really worthwhile
taking a look at children's books.

In the course of looking at these projects, it came to mind
as to what other items could possibly be made into
spoolknitters apart from cotton reels/spools?

Can you think of any others?

Posted by crazyhaberdasher at 11:56 PM No comments: 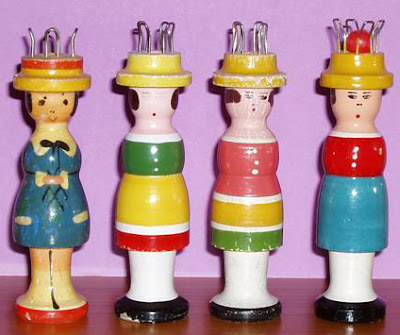 As I keep saying, there are so many questions
regarding vintage spool knitters.
If you find them without a box, how are you to
know who, where and when the
spool knitter was made?
The spool knitters themselves give you very little
answers as to their maker or origin.
The knitting Nancies of Spears Games' are perhaps the
most recognisable spool knitters.
Then when you come across what look like later versions
of the "Nancy in the skirt", there are more
questions that arise.
Are they simply copying the style? Are they authorised
makes? Where were they made? And so it goes on......
If anyone has any of these later versions in their
original boxes, I would dearly love to hear from you.
If anyone has any definite information at all about these,
could you please let me know? 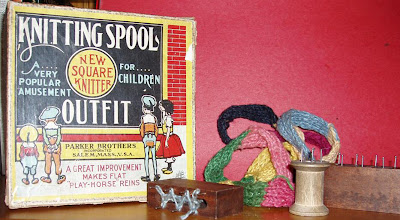 Above is a vintage Knitting Spool Outfit. We have a lot of
information here on the box BUT there is no date.
We can only take an estimated guess here and the
only thing to go by is the style of the illustration on
the top of the box.
The knitting "looms" to create the flat
"play-horse" reins are very simply made. Nothing to
suggest great style here. Sadly there are no
instructions with the box, so nothing there to give
you any clues. I would guess at 1920's for the approx.
date for this set according to the style of the children's clothes.
But it is hard to say if this illustration was following the fashion
of the day or if it was just a "comical decoration" (for want
of a better description), for the box.

I am open to suggestions here, any information, any
one willing to discuss this further. Hopefully, we can
learn something.

Below is the lid close -up. 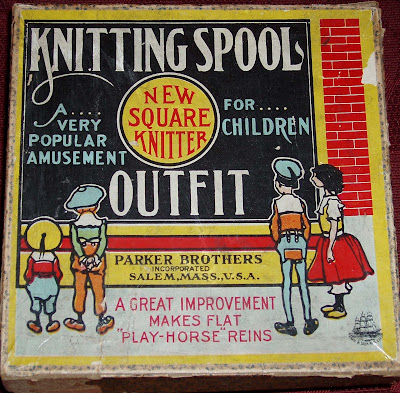 Posted by crazyhaberdasher at 9:33 PM No comments: 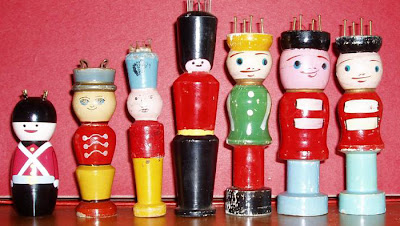 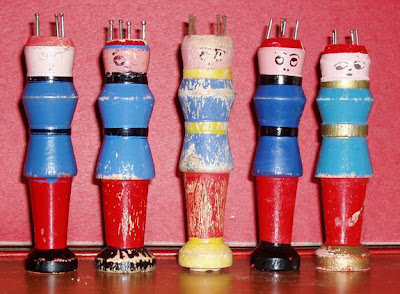 Posted by crazyhaberdasher at 8:24 PM No comments:

These two spool knitters, I have been told,
were Made in Erzgebirge, Germany.
I would appreciate any information on these
spool knitters and if they originally
came in a box.
There are no markings on the bottom
of the spool knitter. 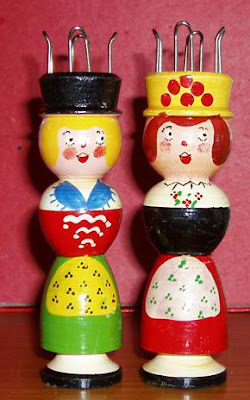 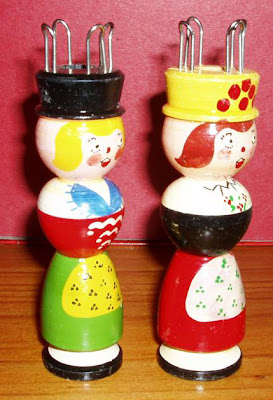 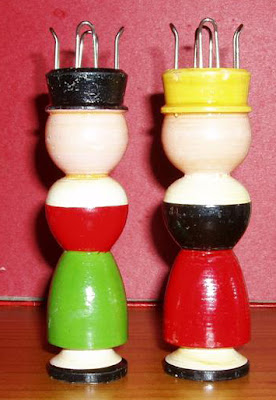 Posted by crazyhaberdasher at 9:07 PM No comments:

It is amazing that even in the spool knitting collecting world there
are so many questions as to why things are the way
they are. The more you get into it (collecting), the more there
are puzzling finds.

The first box shows a different "Nancy" (note the missing staples/nails)
on the lid compared to the second "Nancy" box. 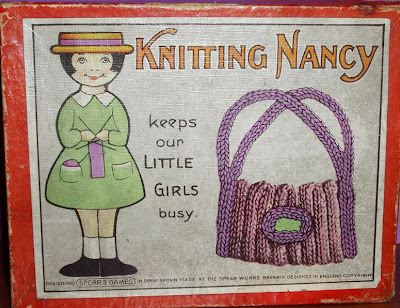 Written on the lid is - Registered Spear's Games in Great Britain. Made at the Spear Works Bavaria. Designed in England Copyright.
I would take a guess and say that this one is the older of the two boxes.

Funnily enough, this was the "Nancy" found in this box. 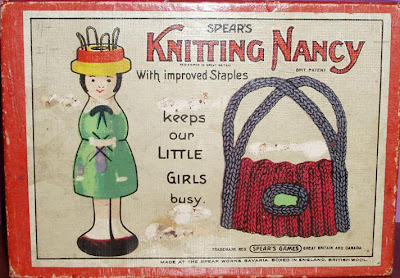 This box has - Trademark Reg. Spear's Games Great Britain and Canada.
Made at the Spear Works Bavaria. Boxed in England. British Wool.
Also - "With improved Staples"

And again, this "Nancy" was found in the second box. 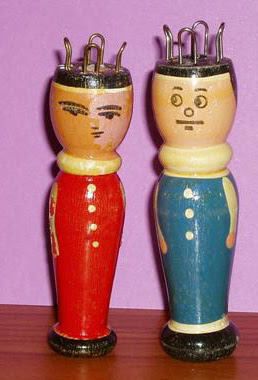 Above are the two "Knitting Nancies" shown together.
(Yes, they are more like "Nevilles"). 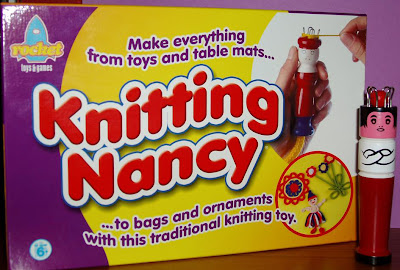 And now we have a box dated 2003 from Rocket Toys & Games
with an address in England, an email address, and a website.
The Knitting Nancy found in this box is the same as
the later Knitting Nancy from Spears Games from
the 1990's before it (Spears Games) was sold
to Mattel. Even though the lid of this set shows
yet a different "Knitting Nancy",
the picture on the instructions found inside
show that this IS the original to this set.
See below........ 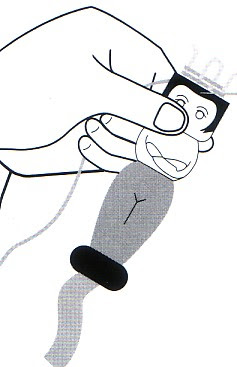 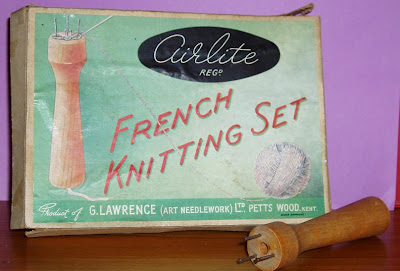 And now for a complete surprise ....... is this French Knitting Set
by Airlite Regd. - Product of G. Lawrence (Art Needlework) Ltd.
Petts Wood. Kent. - note how many nails? Three, and no,
there isn't one missing. This is the first VINTAGE spool knitter
I have found with just three nails. Take a look at the
picture on the box - three nails. There is no date or instructions
with the box.
I know that spool knitting is possible with different numbers of
nails - I have new spool knitters with two or more nails.
But this is the first VINTAGE product found with three nails.
I would guess it is possibly from around 1950's to 60's.

Posted by crazyhaberdasher at 9:25 PM No comments: