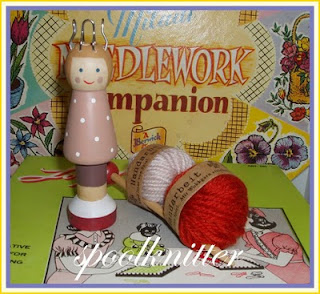 Collectors of spool knitters
are now being catered for very
well - there are more new knitting
dolls for us to enjoy! 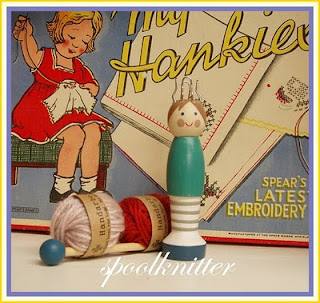 We also find a repaint of a
knitting doll - the Japanese doll. 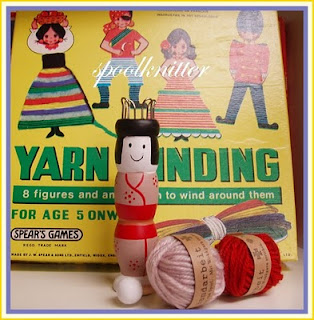 These new knitting dolls are Made in China
with a slightly different version of a box
from a previous set of knitting dolls.
Remember those in their bright yellow
boxes with six different knitting
dolls - Eskimo, Japanese doll, Indian boy,
Indian girl, farm boy in blue
overalls, and another boy in red overalls?
These sets of dolls are
also found in a "knitting Nancy"
reproduction box by Heritage Toys
and Games.
(Both these sets in"yellow" and
"Heritage"
boxes are still being sold -
check out ebay.) 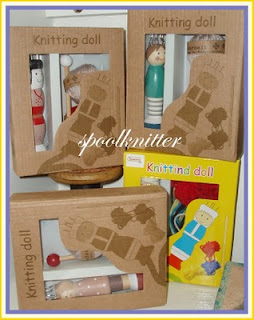 The wool supplied in the new
boxes are from Germany.
The loop tools are wooden
with a different colour ball
end. While the box remains
virtually the same, the various
craft shops, craft companies, toy
shops, and toy companies put
their own brand name/retail information
sticker on the boxes.
I wonder what we will discover next
about these sets!
::..::..::..::..::
Posted by crazyhaberdasher at 3:39 PM No comments:

Ted graciously agreed
to model this little
spool knitting accessory
for me...
a novelty apple core
cord minder.
It is one part of the
prize for the current
Yahoo Spoolknitter Group
Tea Cosy Competition.
If you want to be involved,
HURRY! ... you
only have until
May 29th before
it closes! 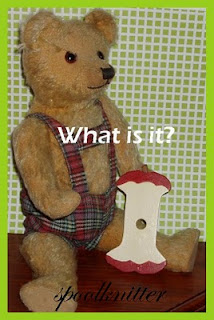 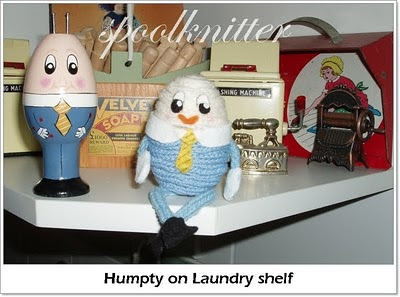 Posted by crazyhaberdasher at 1:16 AM 3 comments: 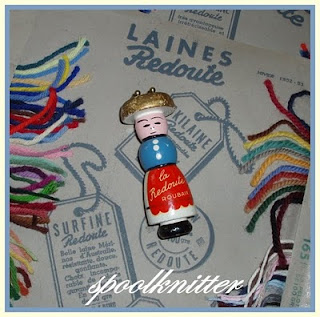 To appreciate the importance of this little tricotin,
we go back a little into the history of Roubaix, France.
Roubaix, in the region Nord Pas de Calais, became
a city with a booming textile and wool industry in the
19th century. There were 200 mills operating
around the city.
Around the 1920's a catalogue/mail-order
industry developed selling wools, patterns,
etc.
Because the town was still reeling from the
effects of WWI, one part of the plan
to get the wool industry back on its feet
was a promotional campaign - our
little "La Redoute" tricotin was offered
in these catalogues and sample leaflets
to help to sell more wool. 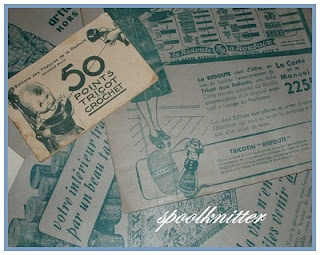 We find this tricotin still available
over time up to the 1950's.

In the 1960's onwards, the industry suffered
a decline being due to cheap imports which
also affected the British industry.
The 1970's up to the 2000's there were
thousands of job losses and buildings became
derelict.
However, Roubaix has now been "reborn" and
today we find, among others, fashion houses,
fashion and textile designers, marketing and
communications and home shopping companies,
and engineering colleges and teaching centres.
La Redoute district in the city
of Roubaix, is now an
important mail-order
centre (La Redoute-Redcats, Damart,
Camaïeux and Phildar)
and also the "3 Suisses" wool company
is still in operation, creating wools, patterns,
catalogues, etc.
So, this little tricotin with its
important role in advertising,
is an extremely
collectible spoolknitter to look out for!
>>>>o<<<<
Posted by crazyhaberdasher at 12:16 AM 4 comments: