These spool knitters were purchased in Australia.
All are similar shape - the spool knitter at right is
hand-painted from a blank the same as the blank
at left.
Interesting to see some different looks from
the one shape. 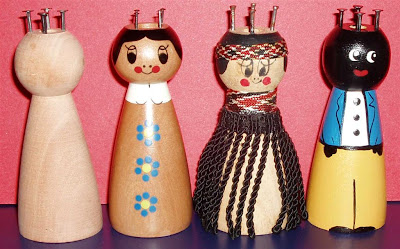 These spool knitters had been in the
pipeline for some time - partly due
to inability to finally decide which
colours to use (there had been
many changes) and
partly due to time!

Here below is the before photo -

......and here we finally have the
King and Queen. 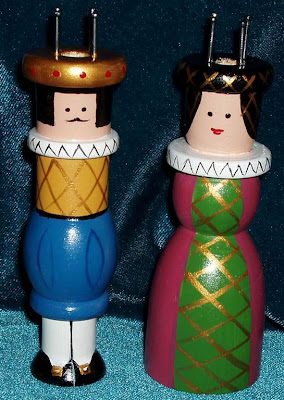 Posted by crazyhaberdasher at 6:37 PM 3 comments:

I had to take a photo of the
latest arrival!!
My extra super special fantastic
favourite vintage spool knitter is
the "Spear's Games" Knitting Nancy
from the 1930's.......so when you find
one, it has to be a special occasion!
Here she is.... with her thoroughly
modern cousin (left).
I love the colour green she is
wearing. She would have been one
of the popular colours of her time.
Of all of the colours that have been found,
I think it is the brown that would be
the rarest - but I could be wrong.
Let us know if you have other "Nancies"
in other colours. 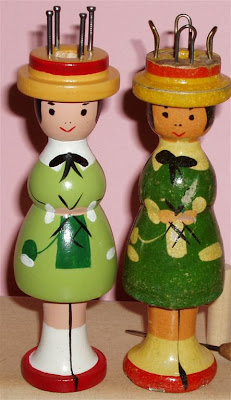 If you would like to share any of your photos of
Knitting Nancies or other spool knitters, you are
most welcome to join the Spool Knitter Group on Flickr.
We would love to see you and your collection.

Do you know who this spool
knitter/tricotin was created after?

I looked up the internet and found
that Madelon was Guignol's wife.
Guignol is a popular French puppet
character who was always getting into
"trouble".
Is she named for this character?

I asked my French friend and I was
told that "La Madelon" is a popular song
from Charles-Joseph Pasquier written during
World War I: a very popular song with the
soldiers which soon informally became a sort
of 2nd National Anthem.
Madelon is the daughter of an Inn-Keeper in
Brittany - below is the English version of
the first verse and first chorus ......

Is she named for this character?

Below is the spool knitter/tricotin. I would
date it as from the 1920's. Note that she is
knitting on four double pointers.
So, is she the fore-runner for the vintage
Spear's Knitting Nancy/Jeanette La Tricoteuse/
Strickliesel spool knitter who also knits on four
double pointers?

Here she is with her original box. 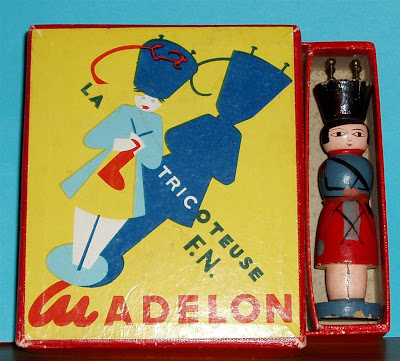 Madelon La Tricoteuse
(Madelon the Knitting Machine)
- the front of the instruction leaflet. I would be very interested to hear from anyone
regarding this vintage spool knitter/tricotin.

Posted by crazyhaberdasher at 11:44 PM No comments:

A LOOK AT A BOOK

As many spool knitter collectors are
aware, there is very little written information
about spool knitters.
I have found a book called "Encyclopedia
of Children's Sewing Collectibles" written
by - Darlene J. Gengelbach
(Collector Books - available on
their website)
The section titled - Children's Knitting,
Crochet, and Weaving Sets is of great
interest.
Naturally, I cannot disclose much of
it here, but here is a sneak peak. 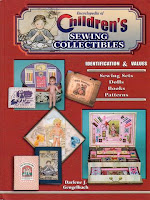 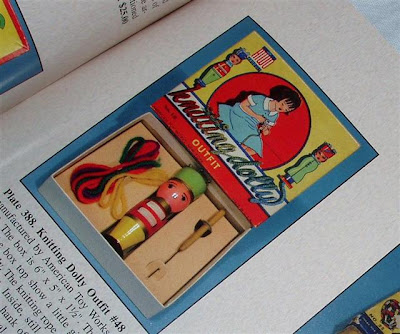 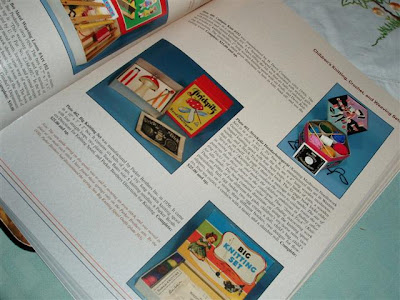 It is really worth purchasing!

Posted by crazyhaberdasher at 9:53 PM No comments:

Just use this trusty magic spool

For fun at play it is a jewel~

T. Buettner & Co. was an art needlework supply
company in Chicago. The earliest catalog
that I have found from this company is dated 1906.
If any reader has any information on T. Buettner
& Co. Inc., I would love to hear from you, thankyou!


Below is the box lid. 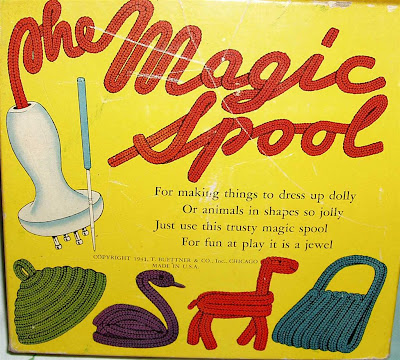 The instructions found in the box.
(I have two of these sets and the other
set was missing this sheet.) 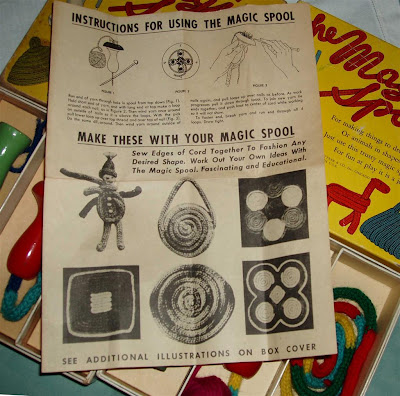 Inside the two sets (side by side) - as found, with the
original spool knitters and others
added.

Posted by crazyhaberdasher at 11:33 AM 5 comments: 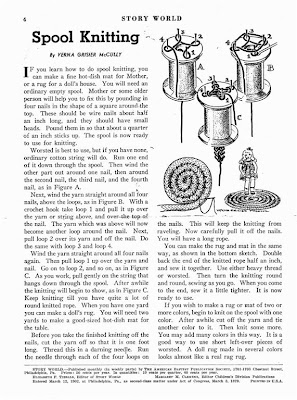 (There will be a post featuring the "Magic
Spool" coming up).

Posted by crazyhaberdasher at 4:32 PM No comments: