I will be away for a week. 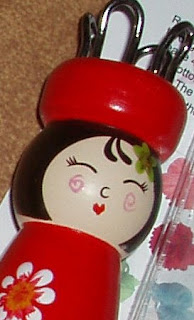 I will have something
special for you when I return so
stay tuned!
(a sneak peak)....... 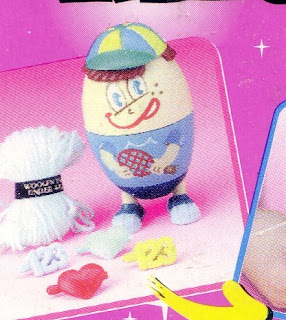 Posted by crazyhaberdasher at 12:46 PM 2 comments:

I had to let you know that
I didn't have to search too
long for my Santa Knitting
Buddy.

Here he is, dropping in for a
quick visit - maybe not the
right time of year, but very
much joyful just the same! 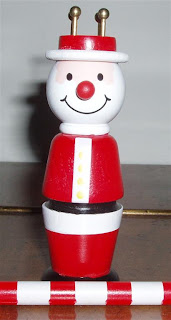 Some of you may be wanting to
purchase one too - but the site
that I found him on only posts in Australia.
If you are desperate to own him,
then maybe if you contact me, I might
be able to arrange something.
(See below..........) 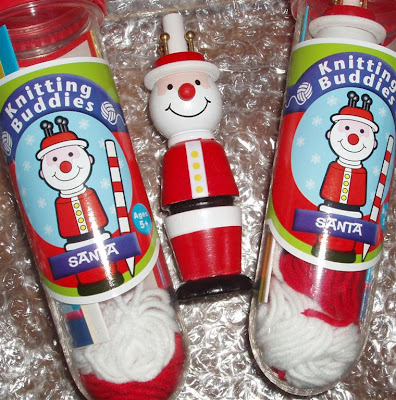 (Added later - Good News! - I have now been informed that
- echidnasontheloose.com.au do post internationally)

Posted by crazyhaberdasher at 3:30 PM 5 comments:

I was very surprised the other day
when I found some delightful
spool knitters to buy!

After my little "whine" about how
boring spool knitters were becoming,
and how they all seem to be made the same
shape, these are a different
approach that apparently
had been on the market for a little while.

Knitting Buddies have three
spool knitters in their range.
A Prince (although to me he looks more
like a policeman!), a Santa, and a Princess
(looks just like a little girl).
They are a great looking trio
and well made also.
Dated 2006 (yes, it took me a while
to discover these!) by Tree Toys. 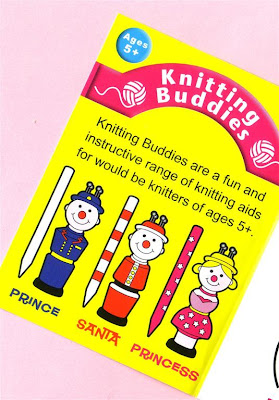 I think that these capsules are very
handy and should help keep the contents
from going astray. 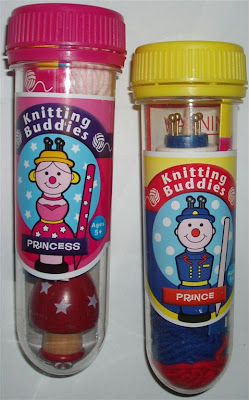 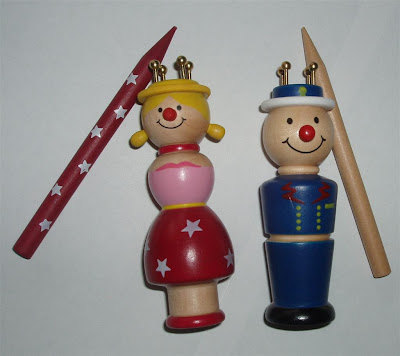 Well, you would have guessed that I am
looking for the Santa from this range
to add to the collection. The search
continues.........!

Posted by crazyhaberdasher at 1:12 AM 4 comments:

Why do these little objects
have so many different
names?

Knitting Nancy is a brand
name for the Spear's Games
knitting toy. First produced in
1926 in Germany, when the company
split and a branch opened in England
it was named the "Knitting Nancy".
Spear's Games exported to the US and
Australia among others (English speaking
countries) and it seems that any
knitting doll became known as a
Knitting Nancy.
The German branch named it
"Strickliesel" and so a knitting
doll in Germany became commonly
known as a strickliesel.
But of course other toy companies
couldn't actually use that name
for the knitting doll that they
produced.
So we have the Dolly Bobbin,
Knitting Knobby, Spool Knitter,
and Knitting Dolly
among others.
But we could go back even further
to the time when in France
shortly after the First World War,
where the wool companies planned
a large promotional scheme (probably the
first of its kind - but I could be wrong)
by giving away knitting dolls known
as a Tricotin to school children.
This was to encourage the public
to buy more wool and get the
industry back on its feet.
...... Added later .......
the La Redoute wool company in Roubaix
France is said to be responsible for this
scheme at the time.
La Redoute is now a mail order company.
Roubaix has been the centre of wool refining
since the Middle Ages ........
These Tricotins were produced
in a cottage industry and had
very colourful bodies with naive
painted faces. Those that
have stood the test of time and
still retain their rusty nails have become
extremely collectible!
So this is quite possibly where the common
term of french knitting could have originated.
It does seem that this knitting rope occupation
was most popular in Germany and France.
Many vintage knitting dolls are found
in abundance
from these two countries
that are very colourful,
and are even famous characters
modeled after movie stars,
and well-known advertising
and book characters. There were
patterns produced at the time
for the use of the knitting dolls.
It had been a common past-time for
many years and only now
the rest of the world is realizing
there is more to this than just a toy.

Since I started my Spoolknitter blog over a year
ago, there seems to have been an increase
in the interest of using these knitting
dolls, a large call for more patterns,
and clever ladies in blogland who are
answering the call by coming up with
some wonderful creations. The
production of knitting dolls by various
companies has increased, for which,
us collectors, are especially thankful.
Not that I think it was due to my blog by
any means - it seems that it is time
for the knitting doll/spool knitter to
come into the limelight and shine.
We were looking for another way to craft
and create, and with the popularity of
knitting growing every day, so are the
number of ways to work with wool.

In my previous post, I discovered
a new introduction to the spool knitting
world. I am so glad that I now
have one of these to add to my
collection!

Standing just 12 cms and
a lovely smoothness to the touch -
it is a lovely quality plastic
which is almost porcelain-like.
She holds the scepter which
doubles as the loop lifting tool. 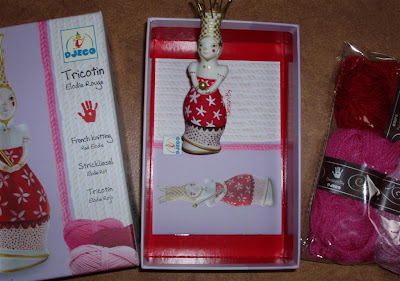 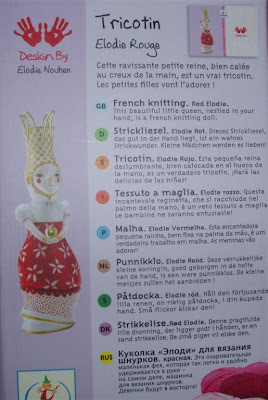 The many names on the back of the box.

Posted by crazyhaberdasher at 1:34 PM 2 comments: