Knitting Nancy gets a Makeover 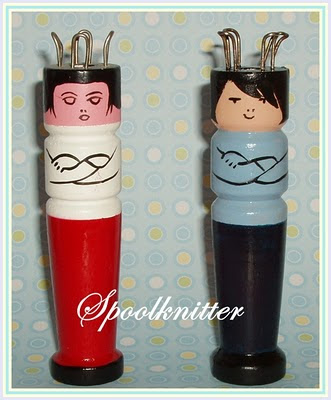 (before and after)
Knitting Peter
I had been wanting to give the Spear's Knitting Nancy of
the 1970's, 80's, and 90's a makeover for quite some
time.
(Knitting Nancy is the product name given
to the spool knitters by Spear's Games)
I have a large number of these common boring
and hideous bright pink-faced Knitting
Nancies in varying degrees of condition, the one
that I have painted here had had an accident with
nail polish of all things! ... and it had been purchased
for next to nothing.
In the 1920's - 30's, there were both female and
male form Knitting Nancies made by Spear's
of Germany and UK .... the male was called
Knitting Peter (Strick-Peter).
I quite like how he turned out in light
blue top with dark blue pants.
I also like his little expression on
his face! 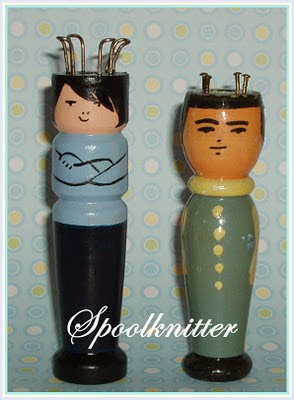 Posted by crazyhaberdasher at 12:09 PM 2 comments: 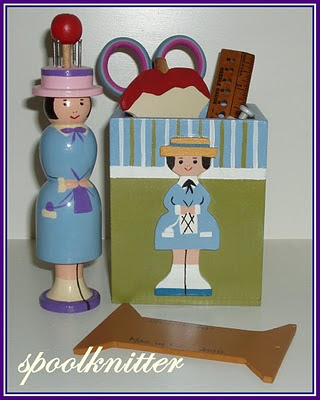 The prize for the winner of the current Yahoo
Spoolknitter Group Competition is this sweet
hand-painted wooden box to hold your
spoolknitting accessories in.
It has a wood cut-out of Knitting Nancy
on the front!
The poll is now on to find our winner!
Link to the Yahoo Spoolknitter Group can be found
in the right-hand column of this blog.
Maybe we will see you there!