Dime Store and Hang Packet Spool Knitters
Dime Stores or Variety Stores were popular for shoppers who had little money to spend.
A great many items found could be purchased for just five or ten cents in the earlier years.
Many items were Made in Japan and they produced cheap toys in abundance.
Among these were spool knitters. Spool knitters, long considered a child's simple toy, were
easy to produce and therefore an excellent product for the Dime Store or Variety Store.
(I apologise for the poor images in this post, due to the plastic covers there
was a lot of light reflections that were hard to avoid) 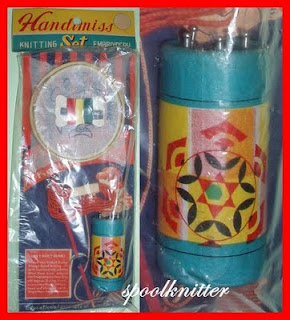 Above, we have a combined knitting and embroidery set. The five post spool knitter
measures just 5 1/2 cms and is a plain wooden spool inside a colourful cardboard surround.
The amount of thread or yarn found in these sets typically is not sufficient for any sort of
project. No date but probably circa 1950's. 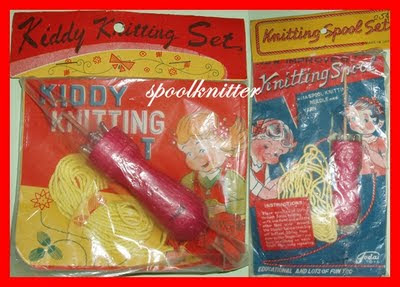 Above are two packets with the same spool knitter (these were
scanned separately then the photos placed side by side, actually both the
spool knitters are the same size).
The five post wooden spool knitter measures 5 1/2 cms. The packet on the
left "Kiddy Knitting Set" shows no markings other than Made in Japan, the packet
on the right "Knitting Spool Set" is marked Jodai Toys and probably circa 1950's. 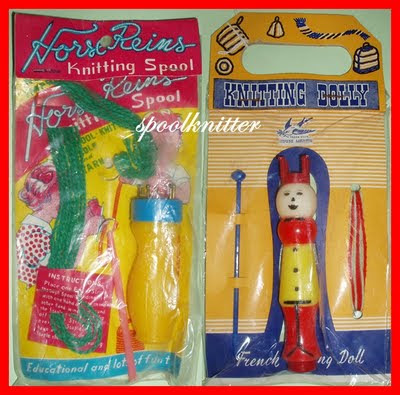 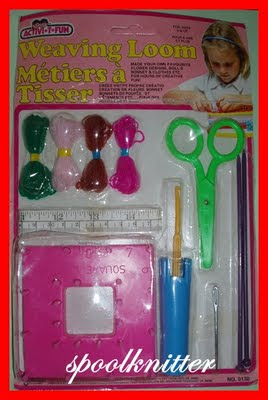 This combination knitting/weaving set is by Galoob No. 9130 and
made in China. The plastic four post spool knitter measures 7 1/2 cms.
Lewis Galoob Toys was founded in 1957 (for more information on the
company see here). This set is probably around 1970's/80's. 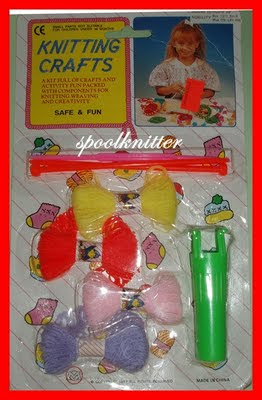 Above is Knitting Crafts by Cantini and Made in China.
This one is dated 1992 with the four post plastic spool knitter
measuring 8 cms.
(No information could be found on Cantini). 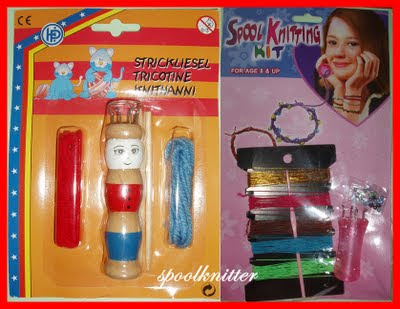 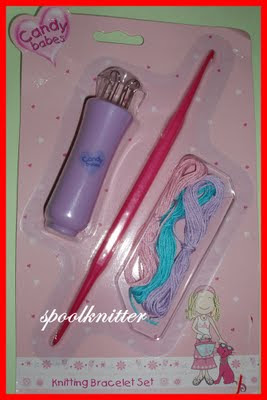 Last is a Knitting Bracelet Set by Candy Babes.
No date here but states that it is made for Woolworths London.
The four post plastic spool knitter measures 10 cms and the
extremely large tool measures 21 cms!
Circa 2000's.
These are just a few that I have found and hope to
continue to find others.
************
Posted by crazyhaberdasher at 6:06 PM 3 comments: