Bradley's
Toy Knitting Outfit
Milton Bradley Co.
Springfield, Mass.  U. S. A.
Milton Bradley, born in 1836 in Vienna, Maine,
was first interested in lithography as a teenager.
By 1860 he had founded the Milton Bradley
Company and the first color lithography shop
in Springfield, Massachusetts.
Apart from games,  Bradley was
interested in children's education and
learning through play,
and the company also produced
materials for kindergarten children.
One such item was the Toy Knitting
Outfit. 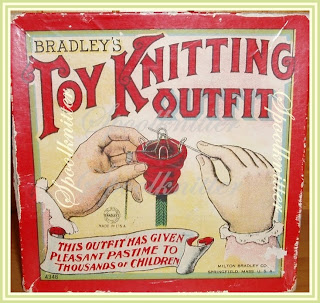 This is box numbered 4348 and is found in
the "Bradley's School Materials and
Books" catalog dated 1921.
Front and back cover shown
below, 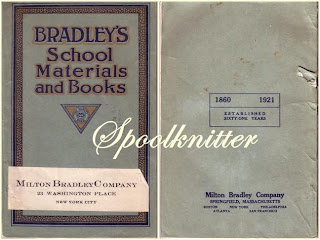 Here is the page where it is found - and
another two sets are also mentioned here,
numbers 4195 and 4312. 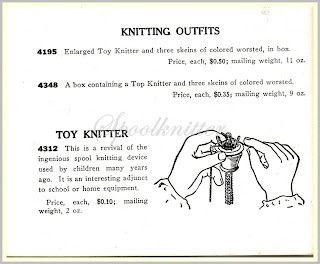 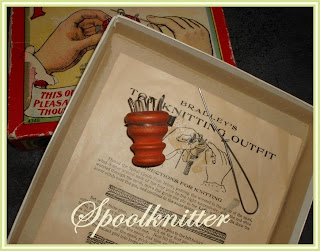 Oddly, I also have another set by Bradley which
is number 4200 (below). I am only guessing here but
this set could have possibly been made for the
general public. Inside, it has the larger
spoolknitter which is also mentioned in the number
4195 set above. 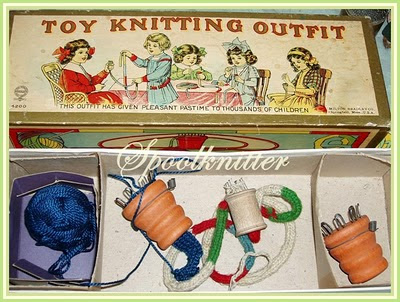 This particular box has two of these - was
this set meant to have two? ... it is possible
as it could have been for sharing with a
brother or sister.
(The wooden spool with nails has been added
sometime later.)
So these sets are from the very early 1900's and
that makes them practically 100 years old!
I am so grateful to whoever took care of these sets
that they remained in great condition.
(Bibliography -
Encyclopedia of Children's
Sewing Collectibles by
Darlene J. Gengelbach - totally
recommend this book, I love it!)
============
=======
==
Posted by crazyhaberdasher at 10:11 PM 1 comment:

New Knitting Dolls
These little Mermaid knitting dolls are
as cute as can be.
There are six to the set each
one's hair different from the other.
They have little sparkle dots on
their bases in various colours.
They are newly released here
in Australia, and as far
as I can tell, very limited at present.
They should be more easily available
over the next 12 months. 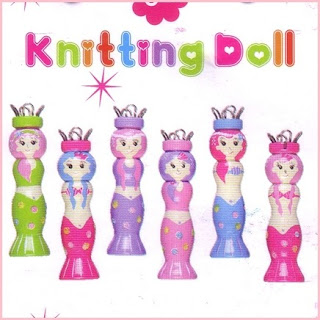 These are made by Sailing Toys and Gifts Co. Ltd.,
exclusively for Sparkle T -
Made in China.
Curiously, instead of different coloured small balls of
yarn, they have included thin satin ribbon.
The loop tool has a fashioned hook on
its end. 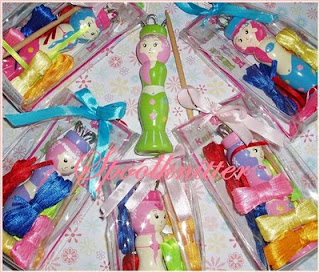 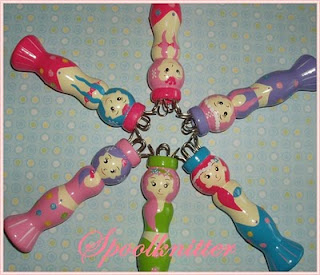 Yahoo Spoolknitter
Christmas Character/Doll Competition
The Yahoo Spoolknitter group are having their
last competition for the year and the
prize for the winner is a
fabulous Bracelet Jewelry
Spool Knitting Kit
which is very
generously donated by our
wire spoolknitter extraordinaire -
Sharon Hessoun
... author of ...
Wire Knitting on a Spool.
Do check out her website -
Beadecked and Beaddicted Online 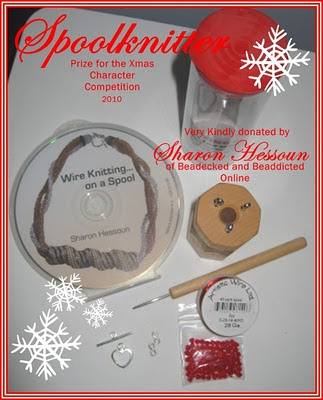 Should you wish to
enter, you must become a
member of our spoolknitter group
on Yahoo - link in right hand column
of this blog.
The photo above shows
all that the lucky winner
will receive and it
also includes the CD of Sharon's book -
Wire Knitting ... on a Spool.
Once you have joined us, all of the
details for the competition will be found
in our Files section.
Competition closes midnight December 2nd!
**********
Posted by crazyhaberdasher at 12:57 AM No comments: